Twitter is #StackingSats and preparing for a Bitcoin boom in 2020

A number of Bitcoin-related hashtags have recently started trending on Twitter as a result of excitement around new Bitcoin apps, the recent BTC price surge and the upcoming halving event. Even Twitter co-founder and CEO Jack Dorsey has hopped on the Bitcoin bandwagon.

2020 may be a big year for Bitcoin because another reward halving event is set to occur. Each halving tightens the supply of Bitcoin, which in turn causes it to rise in value. If history repeats itself, Bitcoin prices will go up again dramatically ahead of the event. At that point, any Bitcoin you’ve managed to earn or save no matter how small the amount will become much more valuable.

The upcoming halving event is just one reason why now is a more exciting time than ever to get started with cryptocurrency. Technical knowledge isn’t required anymore, and you don’t need to be rich to invest, either. In fact, smaller units of Bitcoin are still very affordable. Anyone can buy several hundred units of Bitcoin for just a penny and a growing number of easy-to-use apps let you collect Satoshis for free.

#StackingSats: the hottest trend in cryptocurrency

The #StackingSats hashtag references the Satoshi, which is the smallest possible fractional unit of Bitcoin that you can send or receive. One Satoshi equals 0.00000001 Bitcoin. Because one dollar will buy around 9,000 Satoshis, many blockchain companies are giving them away for free. It may be wise to take advantage of these opportunities. The more Sats you stack now, the better off you’ll be when the next price spike happens.

As far back as February in the dead of crypto winter #StackingSats mania was beginning to take hold of Twitter. Cryptocurrency enthusiast Dennis Porteaux got retweeted when he pointed out that if the current amount of available Bitcoin was divided by the total number of humans on the planet, everyone would have just 300,000 Satoshis. A discussion emerged about whether or not the price of a Satoshi would ever reach one cent.

The #StackingSats trend really started taking off at the beginning of March, when Bitcoin markets began to gather steam again. A popular tweet from Bitcoin entrepreneur Matt Odell suggested that in a few years, people will look back and be “blown away by how cheap Bitcoin was.” The next day, Twitter co-founder and Square CEO Jack Dorsey posted proof that he had purchased $29.00 worth of Bitcoin through Square’s CashApp.

Five months later, the #StackingSats trend is still going strong. This week, The Block reported that the hashtag helped Square reach record-breaking numbers. Meanwhile, the debate about what the symbol for the Satoshi should look like continues to rage on.

Many cheap and easy ways to collect Satoshis abound

In the past, the process of buying Bitcoin required you to go through a lengthy, time-consuming ordeal. This isn’t the case anymore, thanks to the fact that cryptocurrency regulations are becoming clearer as time goes on. Moreover, several popular new Bitcoin-compatible apps are making it easy for anyone to get involved with cryptocurrency. Here are a few of our favourites.

Lolli is a Bitcoin rewards program that’s especially useful for earning cryptocurrency when you travel. Their partners include Booking.com, Priceline, Hilton, Marriott and over 500 other popular brands. Once you join, all you have to do is shop. Each time you buy a product or service from one of Lolli’s partners, Satoshis land in your Lolli wallet. To make a withdrawal, you need at least $15 worth of BTC, and you also have to pay a $0.25 fee if you want to withdraw USD. There is no fee for moving your Bitcoin to an external wallet, but you have to cover the mining fees.

Early Bitcoin users may remember Fold from 2014. It was one of the first Bitcoin rewards apps to hit the market. Problems with the Bitcoin network caused the company to temporarily shut down, but Bitcoin’s new Lightning Network has allowed Fold to make a comeback because it made Bitcoin cheaper to use and drastically improved its transaction speed. Fold is very similar to Lolli, only it’s better suited for everyday purchases like buying a coffee at Starbucks, going to AMC movie theatres, catching an Uber or shopping at Whole Foods. Fold doesn’t charge any fees and it lets you connect any external Bitcoin wallet directly to your Fold account.

CashApp is Square’s answer to PayPal, Apple Pay and Google Pay. It’s a quick and easy payment app that links to your fiat bank account and lets you quickly send money to your friends and family as well as pay for things in stores. The main thing that sets CashApp apart from its competition is the fact that you can buy Bitcoin with it. While CashApp has yet to introduce a Bitcoin rewards program, you can still collect some free Satoshis with it. You get $5 worth of Bitcoin as a reward when you sign up.

Tippin.me is slightly different compared to the apps listed above because it’s not a payment service or a rewards program. Think of it as a virtual tip jar for Twitter. After you connect Tippin.me to your Twitter account, a lightning icon will appear inside your tweets. If another Tippin.me clicks that lightning icon, they can send you a Satoshi tip-- and you can send them one back, as well. If Tippin.me catches on, it can change the way that people interact with social networks.

Here at Vimba, we’ve decided to join the #StackingSats movement by launching a rewards program of our own. If you refer a friend to Vimba, we’ll send $20 worth of BTC to both of you. In case you don’t already know, Vimba lets you set up set-and-forget style cryptocurrency savings plans.

You can start stashing away Satoshis with us for as little as $50/month. 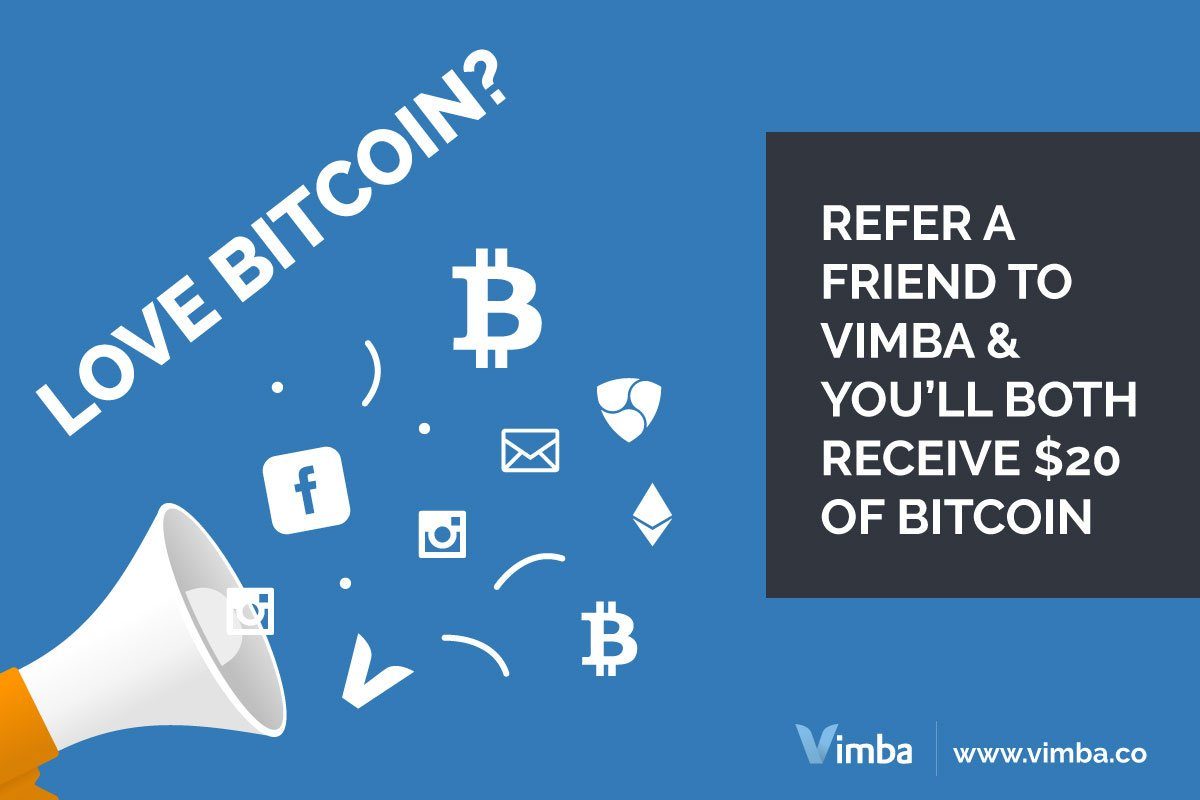 What is a hardware wallet?

How Do Bitcoin Transactions Work?